YF&R Achievement Award
The YF&R Achievement Award recognizes young farmers and ranchers in Arkansas who have excelled in their farming/ranching operations and exhibited outstanding leadership abilities. The award is designed for an individual or couple involved in full-time production agriculture with a majority of their income subject to normal production risks.

The 2021 Achievement Award winners were James and Ashton Dixon. The Dixons have six broiler houses on 44 acres where they expect to grow 5.7 million pounds of chicken in 2021. They also will remove and sell roughly 1,400 tons of litter per year between flocks. The family received a $35,000 cash prize and a trip to the 2022 American Farm Bureau Convention in Atlanta to compete for the national award. Prizes courtesy of Southern Farm Bureau Casuality Company. 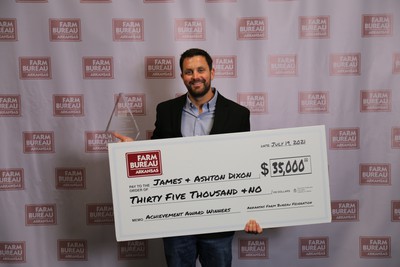 YF&R Excellence in Agriculture Award
The YF&R Excellence in Agriculture Award recognizes the accomplishments of individuals or couples who do not earn the majority of their income through farming, but who are involved in farming and Arkansas Farm Bureau. They are evaluated on their understanding of agricultural issues, as well as leadership, achievements and involvement in Arkansas Farm Bureau and other organizations.

The 2021 Excellence in Agriculture Award winners were John Michael and Rachel Bearden. The Beardens raise cattle, sheep, performance horses and hay along the Ouachita River. John Michael is the Malvern High School agriculture teacher, and Rachel is the Hot Spring County Extension agent. They have a daughter, Lexi Grace. As winners of the Excellence in Agriculture Award, the Beardens received $11,000 cash prize and a trip to the 2022 American Farm Bureau Convention to compete for the national award. Prizes courtesy of Southern Farm Bureau Mutual Company and PCI. 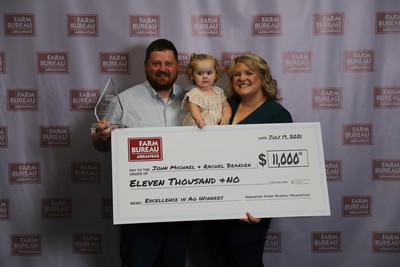 Discussion Meet Winner
The Discussion Meet is designed to simulate a committee meeting where discussion and active participation are expected from each participant and give individuals the opportunity to strengthen their ability to analyze agricultural issues and decide on solutions.

The 2021 Discussion Meet winner was Lauren Martin. In the first round of the meet, Lauren and other competitors discussed ways to recruit and retain young farmer and rancher members. In the final round of the meet, participants discussed farm safety and farm-accident prevention. Lauren and her husband, Brandon, are members of White County Farm Bureau and raise broilers and cattle. Lauren will receive a $7,000 cash prize courtesy of Southern Farm Bureau Life Insurance Company. 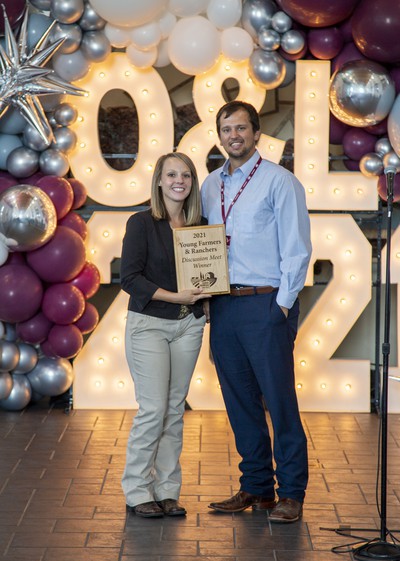 “These awards demonstrate our investment in the future of farm leadership in Arkansas,” said Jennifer Craig, Director of Leadership Development at Arkansas Farm Bureau. “It was an honor to recognize the obvious hard work of these young farmers and ranchers at today’s ceremony.”