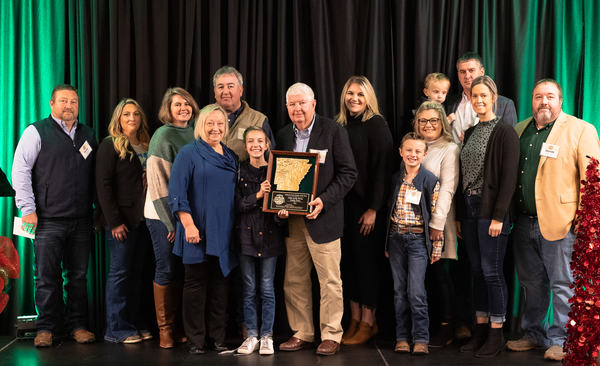 The Cobb/Lyerly/Owens Partnership in Lake City (Craighead County) is the 2021 Arkansas Farm Family of the Year. The honor was announced today at a luncheon in North Little Rock honoring the county and district Farm Families of the Year.

The family’s 50-year-old, 4,250-acre farming operation is diverse, including commodities that range from pigs and peanuts to tomatoes, corn, cotton and soybeans.

Three entities make up the partnership:

In addition, their family-owned Circle L Farms handles all of Cane Island Farms’ trucking needs, as well as those of the local brokers. Circle L runs eight trucks daily, helping to reduce trucking costs for the overall operation.

“We feel very humbled by this great honor. We were really overwhelmed because we weren’t expecting it,” said Steve Cobb. “I told our family members when we were originally asked about running for Farm Family of the Year in Craighead County that I almost feel inadequate because of the number of really good farmers in our area. I felt that way again today when I saw the operations of all the district winners. It looked to me like everybody was deserving.

“I’m very proud of our farm, but the farm is secondary to the family, and I’m incredibly proud for my family.”

As Arkansas Farm Family of the Year, the Cobbs, Lyerlys and Owens will compete in 2023 with nine other southeastern state winners in the Swisher/Sunbelt Expo Southeastern Farmer of the Year program in Moultrie, Ga.

Now in its 74th year, the Arkansas Farm Family of the Year program is the longest-running farm family recognition program of its type in the United States. It begins with selection of the top farm family in each county. Then, eight district Farm Families of the Year are selected. The competition is judged on production, efficiency and management of farm operations, family life and rural/community leadership and values.

Video of this year’s official Farm Family of the Year announcement can be viewed here.

For more information on the Arkansas Farm Family of the Year program, please contact Ashley Wallace at ashley.wallace@arfb.com or 501-228-1521.